MyStake Casino is a big one. So big in fact, that they have one of the largest casino game libraries available for Canadian players.

MyStake was launched in early 2020 with a bang. They decided early on to be the big fish, and their strategy was to get every single game they can under one roof. It was a succesful plan, as the casino has thrived.

In addition to being just a casino, MyStake Casino also comes with a great sportsbook, which includes eSports and horse racing. These are always a great way to round out your casino and give players more intriguing verticals.

The site has a fresh design and a clean user-interface. I had no issues navigating the pages and finding what I needed. Though it has to be said, the biggest problem this casino has is that there are just a staggering amount of games and going through them all is near impossible. Not a bad problem to have, to be honest.

One thing MyStake does that makes them stand out is the bonuses. They have a welcome bonus for every occasion. Casino players have one, sports bettors have their own, crypto players get a unique deal and there's even one for players who want to use it for mini games. All are different and have their own perks. This is a nice touch to make all players feel welcome.

MyStake Casino is licensed and regulated by the Government of Curaçao. 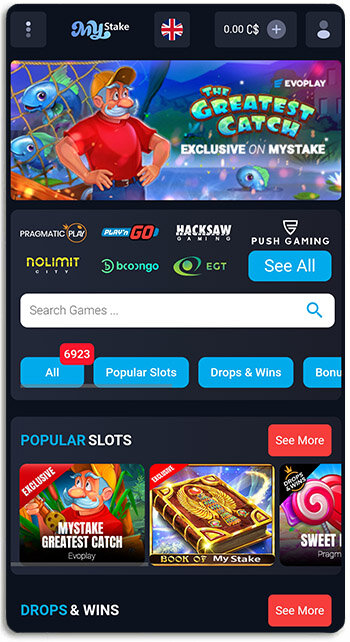 MyStake Casino has plenty of bonuses for players both new and old. You can also choose which vertical you want to play and pick a bonus that is tailored for that.

Casino players start off with a great bonus deal. Depending on how much you want to deposit, you can take one of two options.

Make sure you read the bonus terms and conditions before you take the offer, so you know the rules.

The bonus comes with a 30x wagering requirement for both the deposit and the bonus, which is above the industry standard. So, wagering all this and getting to cash out will be difficult.

The bonus can be canceled by contacting the support, but keep in mind that the bonus is not separate from your deposited funds, and you will lose the entire bonus amount and the generated winnings from your account.

If a casino bonus isn't your thing, you can also take a sports bonus, a mini game bonus or a crypto bonus as a welcome bonus offer.

When it comes to games, there is simply no denying it that MyStake Casino has it all. That's it, that's basically all you need to know.

Not satisfied, okay then. MyStake has collected almost the largest selection of games available in any online casino, but then complemented that with sports betting. They have over 7,000 casino games on their roster.

Now to be fair, some games are not available on every region, but the number is still staggering.

With a library this big, you know there are going to be a lot of game developers on board. Currently they have over 80 game providers and more are coming all the time. This means amazing versatility amongst the games.

It is fairly easy to say that MyStake has everything when it comes to slots, which pretty much is true. Megaways slots, jackpot games, classic machines, modern features, lines, grids, expanding, cascading, and so on.

And if you want something really special, go and check out their Mini Games section. The Dino Game especially has been very popular, as well as Chicken and Icefield.

Though, there is one thing that I find myself wanting, and that is better categories. There isn't nearly enough filtering options when you have many thousands of games. You can search by developer, which is helpful, but they should add feature filters in there to make things easier. At least you can favourite a game that you like, so you can access it faster later.

Playing on mobile devices is easy on MyStake Casino. You can play with any device directly on its web browser. You don't need any dedicated apps to play.

The mobile casino looks and feels just like the desktop casino, which makes changing between them easy. If you know how to use one, you already know the other as well.

Browsing the casino is smooth, and the games load up quickly. The only downside is the same as on desktop, there are just so many games and not enough filters to narrow them down. When you have thousands upon thousands of games, it takes a while to see even half of them just by scrolling.

To make things a bit more difficult, they have actually removed the My Favourites category from mobile. This was the saving grace of the desktop casino, but here, it is sorely missed.

For what it's worth, having too many games is probably the best problem that a casino can have. My advice is to just be adventurous and try out games you haven't played before. Pick a game at random and see if you like it. There are a ton of great titles among the sea of options.

Just like all the other casino verticals, Live Casino is done right on MyStake Casino. It is not an afterthought or something on the side, but rather a massive collection of versatile, high-quality tables.

There are titles from multiple providers, like Evolution, Authentic Gaming, Pragmatic Play, Ezugi, SA Gaming and so on. There are over 200 live tables available.

When you have titles from multiple providers, you are bound to have a ton of variation within the most common games, like blackjack and roulette. This is easy to see on MyStake, where the Game Show category is the least populated.

If you like to play the casino classics, then MyStake is the perfect site for you. But on the other hand, if you are more interested in the speciality games and rarities, then you might be a little disappointed.

MyStake Casino is licensed and regulated by Government of Curaçao. MyStake operates all over the world and provides a safe gambling environment for players everywhere.

MyStake takes responsible and safe gambling seriously. They do their best to prevent underage gambling, money laundering and problem gambling.

Unlike many other sites, MyStake doesn't provide you with any tools to limit your deposits, wagers or losses. You need to stay on top of your own game and keep control.

You can take a break or self-exclude. Should you need to, you can contact the support and tell them.

Please make sure to gamble responsibly. Know when to stop and only play with what you can afford to lose.

MyStake customer support is available to help you on email and live chat.

The casino does have an FAQ section, but it is hard to call it that. There are basically two topics that are answered and that's it. It's not really that helpful.

I did find the live chat to be the best way to get answers on MyStake Casino. The support is always waiting in the lower right corner and getting help is fast. You can even see which help departments are available before you even start the chat.

I asked the chat for some simple questions just to see how fast they were. I was connected with Carlo immediately, who then quickly and politely answered my questions. Top marks for MyStake, no complaints here.

MyStake Casino follows the gambling regulations set by their licensors, which includes the verification of player accounts. They need to that you are who you say you are.

To do so, you need to provide them with the required documents as proof. These may include:

You can upload these in your account settings. There are guided spots where you can send each document.

We advice that all players verify their accounts as soon as possible. This way you don't need to wait any additional time when they are needed. It is annoying to have to wait an additional day or two when you want to withdraw just for the casino to process the documents.

Being an international casino, MyStake offers a wide variety of different deposit and withdrawal methods. These include:

The minimum deposit depends on the chosen methods, but can be as low as C$10. For withdrawals, the minimum is C$20. There are no fees on any transfers.

These minimums are in line with what most casinos have, but I always want to see a smaller minimum withdrawal. Having a low limit makes it easier for the players to stop playing when they want. You wouldn't be forced to try to get over that threshold.

As for the methods themselves, MyStake stands out from the crowd for crypto transfers. You can use a couple of different coins to both deposit and withdraw, and there is even a special bonus available for players who prefer to use cryptos.