There are crypto-friendly casinos, and then there's Bitcasino. This is the mother of all crypto sites and goes beyond anything the other ones are doing.

Bitcasino is no spring chicken. They started out back in 2014 and are one of the oldest crypto casinos in the world, and say they are the first licensed crypto site. The big boom of cryptocurrencies in gambling came a bit after Bitcasino.io had already established themselves as the big dog.

The visual theme of the casino also conveys a message of clean, digital gambling. The crisp white site with only a few colourful accents reminds me of early Apple design, and the near clichéd futuristic high-tech design of every movie tech company. But, if you think it is too garish, you can always go with the night mode and change the site to purple with white accents.

But you are not here for the fashion show, you are here to play, right? That is one thing that Bitcasino also does well. There are thousands upon thousands of titles available from the biggest game developers in the world. No matter what your game is, Bitcasino has it.

All that being said, this is not your everyday online casino. If you have never dabbled with cryptocurrencies, this is not the place to start. Here, everything runs on crypto, including all of the withdrawals. If you don't have a wallet, you can't cash out.

All this means that Bitcasino is not a beginner-friendly casino. You need to know your stuff before you start playing here. This can be a hurdle for some people, but others are just fine with it. If you are of the latter group, then you might want to pay attention, as this casino is something unique.

Over the years, Bitcasino has won several industry awards. One of the biggest being EGR 2022 Best Innovation in Casino award.

Bitcasino.io also has a sportsbook available. Though, that is under a different brand name, Sportsbet.io. 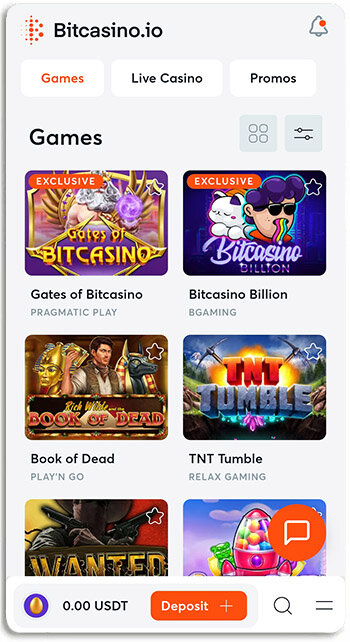 Bitcasino loves bonuses and promotions, but they have a slightly different approach to them. These bonuses are not front-heavy, but rather get better as you go.

For new players, they have a nice little booster. Start playing and you'll get:

This is a nice deal, especially when you look at the terms. The cashback comes with zero wagering and a maximum of 10,000 USDT (tether). This will obviously change with the conversion rate, but we are talking about more than C$10,000.

Usually to get 20% cashback, you need to be a VIP player. Here, this is the starting point for all new players, which is amazing.

To get this offer, all you need to do is opt in and make a deposit. Any supported currency will be accepted for the offer, but the payout will always be in tether.

This deal is good, simple as that. Cashback on losses may not sound glamorous, but it can rack up, especially when it's all wager-free.

There's no shortage of games on Bitcasino, not in the sheer number of titles or their quality.

Bitcasino has accrued more than 4,000 games from dozens upon dozens of game providers. These include some of the big names of the industry, like NetEnt, Microgaming, Play'n GO and Pragmatic Play.

Looking at the popular games on the site, you can clearly see all the major slots in there. You are bound to find plenty of familiar names and greatest hits here.

But that's not all. Bitcasino's catalogue is not just a list of the most popular games. There are plenty of smaller developers on board with their innovative games that challenge the status quo. Not only in slots, but also in other game categories as well.

I found myself trying out several games I had never heard of before, and finding some amazing titles. Here, it's good to have an open mind because there's plenty to sample.

In addition to having plenty of games, the question is also how well can you search them. Bitcasino has some nice filtering options available. You can search by name, provider, category and sort the results by a couple of factors, like RTP, volatility or hit ratio.

When it comes to playing the games, I had no issues loading the games or playing them. Some of the menu features, especially the provider list, took some time to load on occasion. That could have just been a spike in server activity, as it was a bit random when it occured.

Mobile gambling has been a big deal for Bitcasino. They have put some real effort into making a mobile version of their casino that runs smoothly and gives the players all the same features and experiences as the desktop version.

Bitcasino mobile casino has the same high-quality game library as the desktop casino. You are not missing out on anything if you play solely on your phone or tablet.

Even though the mobile casino is clean and looks very stylish, some menus were not easy to find. The footer bar can open multiple menus, and finding the one that you wanted might take an extra click or two. I noticed myself fumbling a bit on occasion when trying to open the right one.

When you do get familiarized with the user interface, playing becomes easy. The casino itself and the game categories work flawlessly on mobile, so finding stuff and playing is not an problem.

Apart from those menu mishaps, I found the mobile environment pleasing. Surprisingly, even on mobile, I preferred the clean light mode over the dark purple dark mode. Maybe it was the colour, but the white look felt more professional.

Bitcasino has a great selection of live tables on their site. There are multiple game providers and they all bring a lot to the table.

When open the live casino section, you are greeted with a couple of hundred tables. This alone would be good, but that's not the whole story. There are hundreds more tables inside the provider lobbies, which can be found amongst the tables.

This is good to keep in mind, especially if you are looking to play some of the classics, like blackjack or roulette. For example, Evolution's lobby has about 140 tables of blackjack alone.

Speaking of providers, that is where Bitcasino shines. They have tables from nearly a dozen different game studios, which means that you are in for a treat. All the big studios are there, so you get both quality and quantity when it comes to live tables.

When I tested the casino, I was pleasently surprised at what was on offer. All of my favourites were there, meaning Speed Baccarat and couple of game shows, and I got to try out a few new titles that I haven't played before.

All in all, Bitcasino.io live casino is good, really good. They have it all and the presentation is nice.

Bitcasino.io was the first licensed crypto casino. They have a Curaçao license and are thus regulated by the government of Curaçao.

Bitcasino is all about customer safety. They want you to be able to have a protected account where your data and money are safe from everything.

To protect your account, Bitcasino offers two-factor authentication. This is a rare treat on online casinos, and something you might want to take a look at. It makes breaking into your account nearly impossible. This is something I love and whole-heartedly advice you to take advantage of.

Unfortunately, that dedication to player safety doesn't really reach responsible gambling. The casino does have some information about the dangers of gambling and guidelines on how to stay in control.

That being said, there are no responsible gambling tools, like deposit limits, loss limits or anything like that. You can self-exclude, but that's about it.

This is something I would like to see Bitcasino focus more. Every little bit helps when it comes to preventing problem gambling, and it doesn't take a lot to reach a decent standing in this.

Customer support is something that wasn't just an afterthought on Bitcasino. They have a high-quality support system that starts off with an extensive FAQ and then provides your with support via:

What I like about the support here is just how easy it is to get help. The support is available 24/7, which is a great start, and the FAQ has plenty of information about getting started, your account, cryptocurrency in general and so on. You are not left in the dark here.

I tested the live chat support and was connected immediately with Kurt. In no time, he was able help with my question in a very polite manner. This is the level of help you want on your casino of choice, and Bitcasino delivers.

The live chat supports plenty of languages, English, German, French, Spanish, Turkish, Korean, Japanese and Vietnamese to be exact, but it may sometimes vary what is available. For English speakers, that's not an issue, but occasionally you might not be able to get support in, say Vietnamese or Turkish.

Bicasino is all about security and user-friendliness. This can be seen perfectly in the sign up process and account verification. Both are handled superbly in my opinion.

To start you off, Bitcasino has made signing up easier. You can input your information normally, or you can use Google, Metamask, Facebook, Twitter, Apple, Telegram or Line to automatically sign you up.

These are nice little things that can help data security, especially when used in conjuction with two-factor authentication.

Even when using external methods of signing up, you still need to verify your information. You can't make any withdrawals until your account is verified.

You can complete the verification process on your own as soon as you join in. Just head to your account settings and there you'll see a big Verify Identity section.

The process is simple and well-guided. Just send the required documents and your account will be verified as soon as the staff can process it.

Bitcasino is a crypto casino, which makes deposits and withdrawals a bit different. I would say that if you aren't familiar with how cryptocurrencies work, this may not be the place to start. Learn what bitcoin is and how to use wallets before you start using it to gamble.

If you know about cryptocurrencies and enjoy using them, then this is the casino for you. The casino runs on multiple coins, which can all be set as your default unit. By default, the casino is set to bitcoin.

You can deposit bitcoin, doge, cardano, tether, ripple, tron, lite, ethereum and binance coins directly from your wallet. The minimum deposits for all are fairly small and depending on the rates, often equates to C$5. For example, bitcoin minimum deposit is 0.00025 BTC.

If you don't have any coins in your wallet, or want to deposit something else, you can buy coins to your casino account directly. Bitcasino has transaction partners, who in term accept credit cards.

Withdrawals on the other hand can only be made in crypto. The minimum also sum varies according to the rates, but is often around C$10, as bitcoin minimum is 0.0005 BTC.